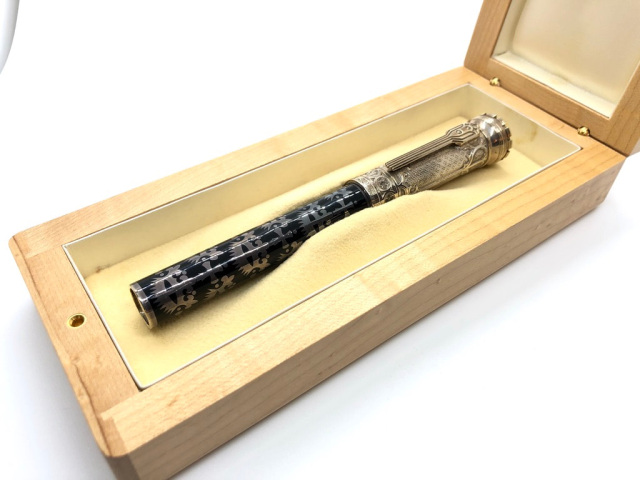 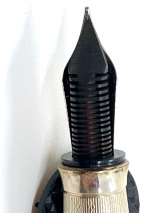 Michel Perchin inc started to make exquisitely crafted writing instruments in England in 1995, closing their doors around 2008. The company was named after Michel Perchin (Mikhail Perkhin), a Russian artisan who became the leading work-master in the House of Fabergé in 1886. It was Michel Perchin that supervised production of their famous Faberge Eggs, a favorite of the Russian Czar Nicholas II, until his death in 1903. Hence the use of materials and theme for these writing instruments are similar to the Faberge Eggs.

This vintage Gothic Fountain pen is is beautiful, near unused, condition. We're told that it was inked once, cleaned, and stored. From the unblemished condition of both pen and box we can easily believe that account to be accurate. Truly this pen is without blemish. There is modest tarnish to the Sterling Silver, but consistent with our policy we do not alter the as-found patina of collectible pieces such as this. Should the new owner decide to restore the original gleam of polished sterling, it can be easily done with a soft jewelers cloth. Comes in its beautiful original wood box. The nib is 18K gold, medium size. Retails on the Penporium website for $3300.00.