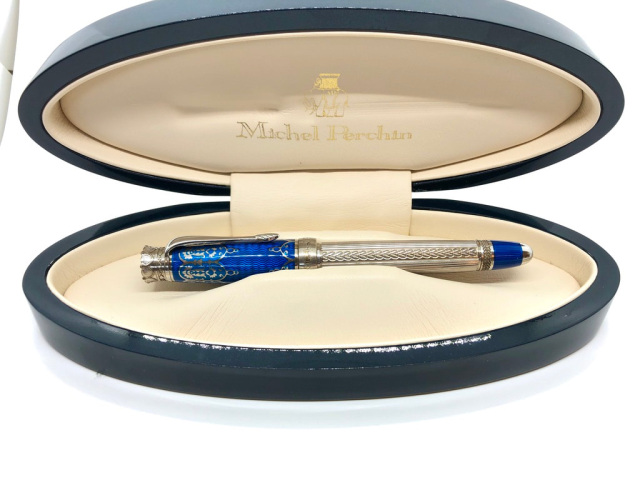 This vintage Imperial Fountain pen is is beautiful, near unused, condition. We're told that it was inked once, cleaned, and stored. From the unblemished condition of both pen and box we can easily believe that account to be accurate. There is modest tarnish to the Sterling Silver, but consistent with our policy we do not alter the as-found patina of collectible pieces such as this. Should the new owner desire, it could be easily restored to brilliant shine with a soft jewelers cloth.

Limited in production to 50 pieces worldwide, the Michel Perchin Imperial Blue and Rhodium Limited Edition sold out quickly. This pen is #44 of 50.

Michel Perchin writing instruments give the word quality a new meaning. Their unique designs reach back into time to capture elegance unknown in today’s world of mass production. No expense is spared in materials and workmanship, including the solid Sterling Silver bar from which the cap and barrel of the pen are hewn. The result is a powerful statement of value to be handed down from one generation to the next. The uncompromising quality of Michel Perchin writing instruments is recognized by their presence in the Pen Museum, in Paris, France. Retail priced at $3925.00 on the Penporium website.