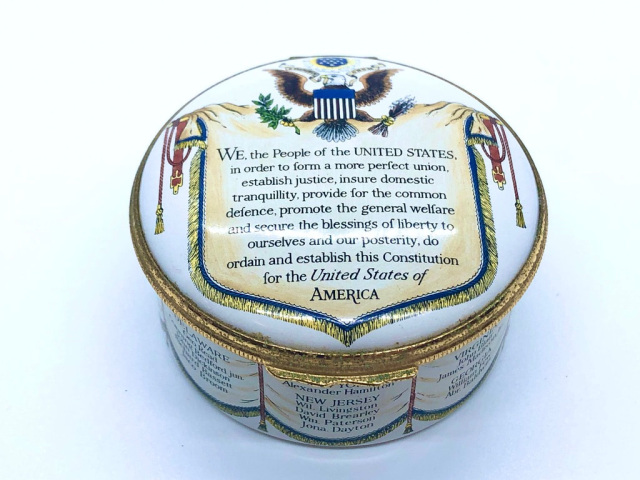 Any collector of fine enameled boxes is familiar with Halcyon Days. The company has been creating beautiful works of art since 1950, and for several decades under Royal Warrant.

Many of our clients have asked for these boxes to be used to store items of jewelry. On the rare occasions when they are available on the secondary market, we acquire for that purpose. These are The Constitution and 1991 A Year To Remember. The outer packaging was not retained by the previous owner. The enameling of theses boxes is as-new, however, the brightwork has been exposed for a time to salt air, leaving a roughness to the finish.

And now for the story. These 2 boxes were acquired on O'ahu's North Shore in the town of Haleiwa from the Estate of a daughter-in-law of William Randolph Hearst, American Businessman, Newspaper Giant, and Politician. Hope Chandler was born in 1921 in New York City. She was a child actress and model, and famously graced a 1937 cover of LIFE Magazine as the “Prettiest Girl in Paradise.” In 1938, in New York's Grace Church, she married the late David Whitmire Hearst, son of William Randolph Hearst.  Our statement of provenance will accompany these boxes.