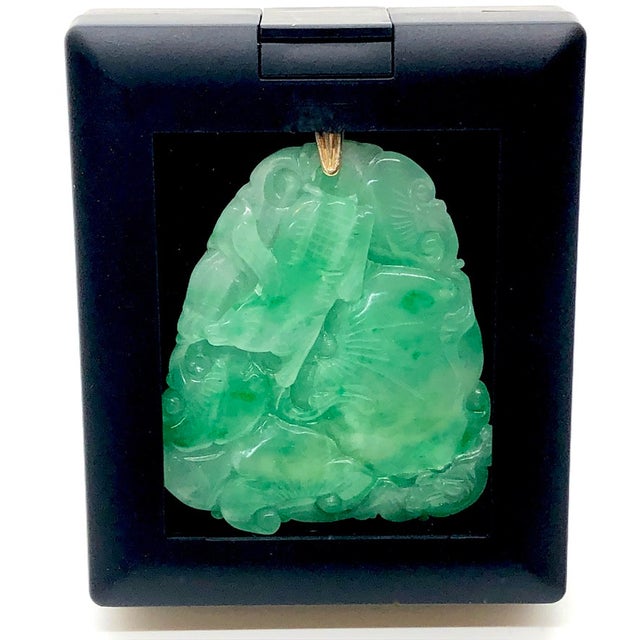 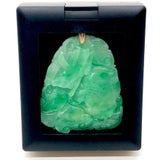 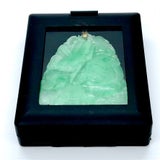 We recently acquired numerous Type A (Natural - no dyes, no infusions) Jadeite Pendants from a long-time collector. This is one of those pieces.

This deeply saturated, near transparent, and finely carved pendant features a Rabbit amongst lotus petals on front, and Koi in pool with lotus lilly pads on reverse. The rabbit is a symbol of longevity. It is said in Buddhist legend that the rabbit offered itself as a willing sacrifice. Therefore it was rewarded for its devotion by being given the capability to transmigrate to the moon. The moon being very important to the rabbit for breeding. Even earlier than the Han Dynasty some believed that rabbit lived on the moon. The rabbit is also the fourth sign in the Chinese Zodiac. The Koi on the back is often seen as a symbol of a great life achievement, achieved through hard work and perseverance. This pendant has been finely executed in Type-A Jadeite with a Moss-in-Snow coloration. It measures 46mm x 38mm x 5mm (not measuring bail) with a weight of 20.4 grams.

This pendant is affixed with an 8mm fine 14K gold bail and will be delivered as shown with box suitable for storage or presentation.

NOTE: To provide the best assay of each piece of Jadeite we take numerous pictures. The first two pictures, front and back on white background and labeled, represent the truest color of the Jadeite. The remaining photos, on black background, are taken with various degrees of additional contrast so that the detail of the carving becomes clearer and provides for a more thorough examination. They are not intended, nor do they, convey accurate coloration.