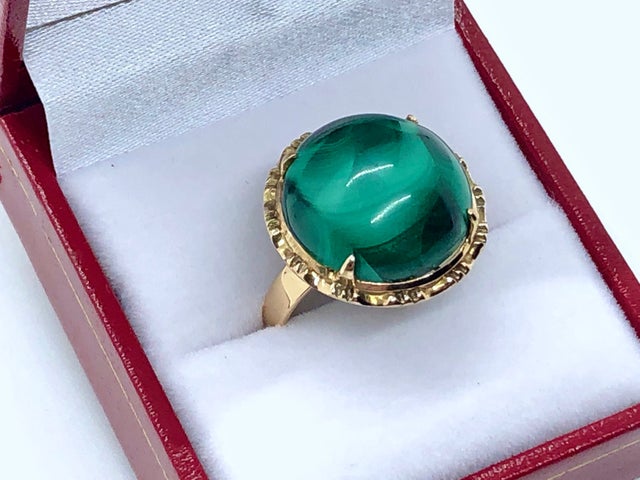 Malachite is known as the "Mirror of the soul" because it was believed that it heals on physical and emotional levels, drawing out impurities and stimulating the Life Force throughout the aura and body. In the Middle Ages, it was believed that Malachite could protect against the “Evil Eye.”  Its protection and healing properties are believed to be potent.

Malachite has been around for thousands of years, dating as far back as 3000 B.C. in ancient Egypt. Egyptians used malachite in ornately designed jewelry as talismans because of its protective powers.

This is a particularly beautiful piece. We're told that this piece of Malachite was brought back from Russia as a rough stone in the 1970s. It was subsequently polished and mounted in this beautiful 14K setting. The verdant colors are deep and lush, and the movement is dazzling. It is set in a custom gold basket setting with scalloped fluted banding. So very many reasons to love this ring.