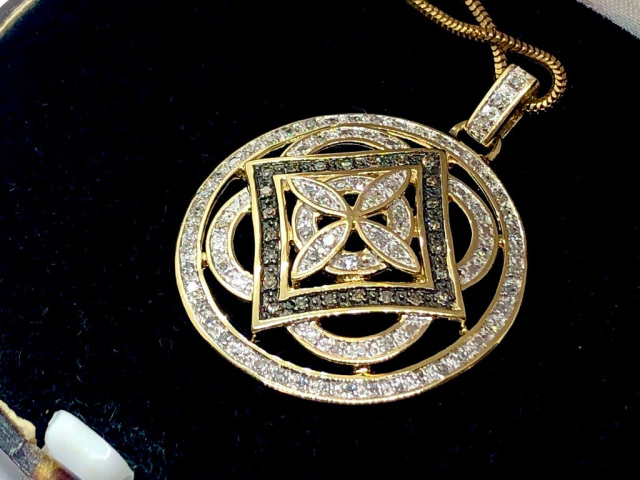 The estate from which this antique piece was acquired really enjoyed telling its story, along with some family history. As the story was told this gorgeous pendant comes from great-grandparents who lived in India as members of the British India Civil Service. It was passed to a grandmother who passed to her daughter who now lives in Hawai'i. Small world.

This is a large pendant measuring 30mm in diameter, 1.18 inches. It was created in 14K gold with a Deco-influenced geometric design. The center diamond-shape is embellished with dark enamel. Everyone who has seen the pendant says they've seen the symbol before, but can't remember where or its meaning/significance. It is completely encrusted with natural Diamonds, including the bail, and we conservatively estimate the Diamond total weight to be .75 (3/4) Carat.

We are told that the attached serpentine chain was not original to the pendant, but added in recent years. Too, the very old box which has been its home for as long as anyone remembers is likely not original either.

From India to the mainland to Hawai'i. We wonder where its next home will be.