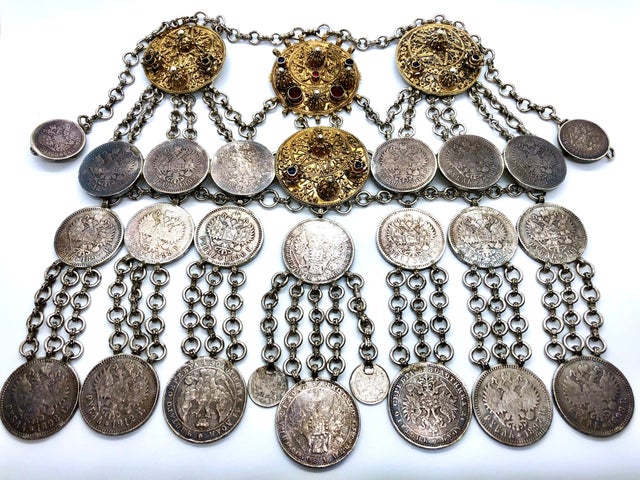 Where to even begin???

First, clear your mind. You see "Turkish" and "Gypsy" "Coin Necklaces" everywhere. eBay, Etsy, Amazon - everywhere. And for just a few dollars. Clear your mind. Forget all that. This is a totally different Universe of Culture and Value. This is the genuine, rare, seldom seen, authentic antique cultural piece of hand-made Romani Art.

The coins are Russian. Mostly 1-Ruble/Rouble Silver Coins from around 1900 - some earlier, some later. There are coins from 1805, 1843, 1877, 1848, 1896, 1897, 1898, 1899, 1912, 1916, and 1917. The necklace was likely made in the earlier 1800s, consistent with the earlier dated coins. This necklace would have represented a family's wealth - or a sizable part of it. A wearable saving account as it were. As the need arose, a coin or two would be taken from the necklace, and a coin of two would be replaced later, accounting for the later dated coins. You can see from the backside that there are additional catches where additional coins could be attached, or from where coins had been removed. This necklace with the current distribution of coins, would have represented a months wages for a middle-class family in Russia around 1900. It was a valuable piece, indeed.

The Ruska Roma (Russian: Руска́ Рома́), also known as Russian Gypsies (Russian: Русские цыгане) or Xaladitka Roma (Russian: Халадытка Рома, romanized: Khaladytka Roma, i.e. "Roma-Soldiers"), are the largest subgroup of the Romani People in Russia and Belarus. Our acquisition of this important necklace comes with the story that it originally belonged to Romani Ancestors who immigrated to the United States around 1945. We applied only a modest conservation cleaning to this piece to remove decades of accumulated dirt and dust. Otherwise, the necklace is completely As-Found.

The necklace is joined with hand-made links and catches. The catches were most-likely made from a Silver-Alloy of other melted coins and malleable metals. We were unable to determine the specific Silver content as each strand, each link, would be different. The Nikolai II Rouble had a Silver content of .900, just below Sterling Silver.

These necklaces are exceptionally rare, particularly in this size and with this content. Definitely an investment grade selection.

The necklace will arrived boxed for presentation and storage.