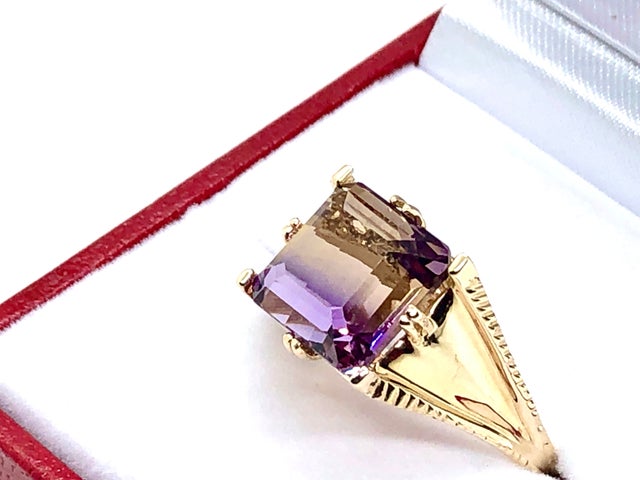 Ametrine takes it name from a combination of the two Gemstones and their colors that it represents: Amethyst and Citrine.

The world’s only commercial source of ametrine is the Anahi mine in southeastern Bolivia. Legend has it that a Spanish conquistador discovered the mine’s location in the 1600s and introduced the gem to Europeans when he presented several specimens to his queen. The mine had been given to him as a dowry when he married a native princess named Anahi. After that, the mine was lost for more than three centuries. Rediscovered in the 1960s, the mine’s ametrine began appearing on the market again during the 1970s.

And here is a beautiful -truly stunning- specimen. Arriving recently from an O'ahu Estate, this Ametrine measures a goodly sized 10mm x 10mm with a weight of 5.72 carats. It's colors of Lavender and Yellow-Gold are very well defined, and the clarity is excellent. No inclusions noted. It is mounted in an elegant setting of 14K Yellow Gold of Size 10. The ring has a weight of 5 grams.