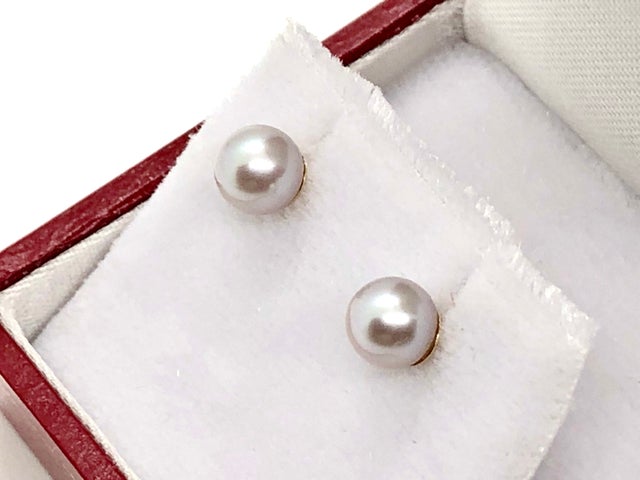 Imperial was founded by Joseph Gladstone in 1917, later renamed the Imperial Pearl Syndicate in 1941. While it was Kokichi Mikimoto who developed the process of culturing Japanese Akoya Pearls, it was during the post-war period that Imperial became the first to bring the valued Akoya pearls to the United States from Japan. A unique marketing campaign helped to establish brand recognition throughout the 1940's and 1950's. Imperial Pearls were marketed in ads featuring some of America's most notable theatre icons, including Elizabeth Taylor, Shirley Temple, Loretta Young.

On June 1, 1995, Imperial Pearl Syndicate and Pearls by Deltah were merged to form Imperial-Deltah, Inc. The merger created a company that is now one of the world's leading pearl companies. These are pre-merger Pearls.

These are beautiful IPS Pearls, probably from the mid-1980s. You would not know that from their appearance or condition. They are pristine, as though never worn. Each of these Pearls measures 6mm in diameter and are mounted on 14K Yellow Gold posts and have 14K Yellow Gold Backs. Their color is White with a Silver Hue. They are Imperial "AA" Graded Pearls as shown in the example from their website. Extra Fine Akoya Pearls, deep lustrous nacre, very well matched color, and clean surface.

An interesting Pearl factoid is that Mikimoto is known for their traditional Rose Overtones. Tiffany specializes in Akoya Pearls with bright Silver Hues, as found here.