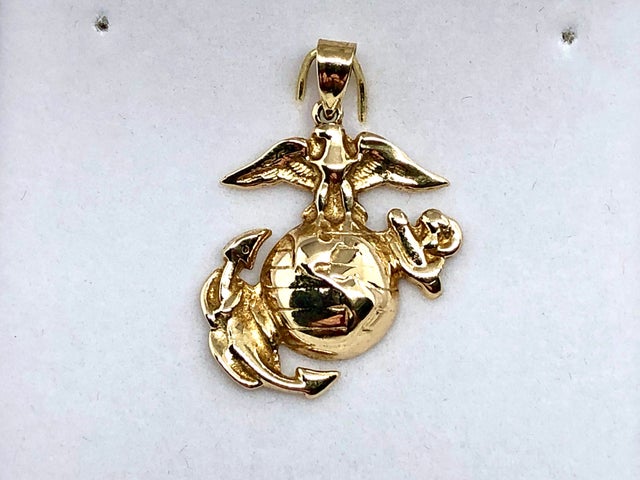 The Eagle, Globe, and Anchor (referred to as an EGA) is the official emblem and insignia of the United States Marine Corps. The current emblem traces its roots in the designs and ornaments of the early Continental Marines as well as the United Kingdom's Royal Marines.  The present emblem, adopted in 1955, differs from the emblem of 1868 only by a change in the eagle. Before that time many devices, ornaments, ribbons, and distinguishing marks followed one another as official badges of the Corps.

This is a very well executed and finely detailed USMC Insignia in 14K Yellow Gold. It measures 27mm x 23mm (about an inch high and 7/8s inch wide). It has a good weight of 3.48 grams. Not a lightweight.

These gold insignia sell for prices all over the map, and we show two examples here of insignia of same/similar size/weight. Your call.

To our Marines: Thank you for your service! Semper Fi!