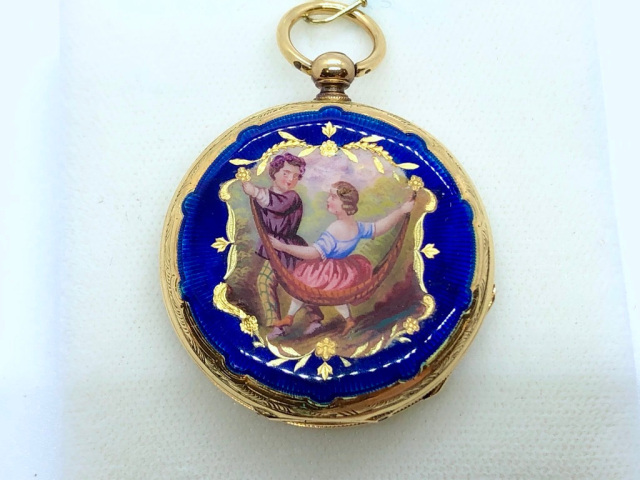 From the early 1800s comes this stunningly beautiful hand-made, hand-painted Guilloche enameled pocket watch in 14K gold by Bautte. It is unmarked for gold purity, but tests strongly as 14K and may be higher. It was not uncommon for watches of this calibre to be made in 18K gold. This antique watch appears to be a 6s size, measuring approximately 34.5 (34 1/2) millimeters is diameter. It has a weight of 121.5 (121 1/2) grams. Watch will come with winding key and storage case. The enameling is pristine. No cracks or losses whatsoever.

About Bautte Watches. Jean-François Bautte came from a family of modest workmen. Very soon an orphan, he was placed in an apprenticeship at the age of 12, i.e. in 1784, and was trained in the different trades of being a case fitter, engraver, watchmaker, jeweller, and goldsmith. He signed his first creations in 1791. On August 1, 1793, he joined forces with Jacques-Dauphin Moulinié, under the corporate name Moulinié & Bautte, case fitters. On October 1, 1804, with the arrival of Jean-Gabriel Moynier, the firm became Moulinié, Bautte & Cie, seller of watch making-jewellery making. It was then that Jean-François Bautte developed his own manufacture in Geneva that brought together under the same roof all the bodies of trades of watch making from that time. Born 22 March, 1772 he died on November 30, 1837 and was buried in Plainpalais Cemetery in Geneva.

The workshops of Jean-François Bautte were grouped around the sales shop situated on Rue du Rhône. With his workmen, he produced watches, jewellery, music boxes. In addition to his store in Geneva, he had branches in Paris and Florence.

Recognized by his high quality creations, his popularity exceeded the borders of Switzerland. The name of Bautte appeared in the writings of Alexandre Dumas, Pere, the writings of Balzac in his “Letters to the Stranger,” and in the writings of John Ruskin. Among some of his clients included Queen Victoria and the Duchess of Clermont-Tonnerre. The Bautte Watch Company was acquired by Girard-Perregaux in the early 1900s.

Note: All timepieces have been inspected and adjusted to accurately keep their best time. Unfortunately, we experience from time to time instances where the postal services, despite our very best packaging to protect from shock, manages a delivery where time will have to be professionally adjusted. This is usually an inexpensive adjustment, and we have priced to accommodate that modest cost assuming it may be necessary. Should this present an issue, we happily accept returns when notified with 14 days.